Hikers passing through high elevation mountain meadows often catch glimpses of a number of familiar flowers. In fact, many of the mountain meadow natives are closely related to our Kansas native plants.

Yarrow (Achillea millefolium) doesn’t change species between Kansas and Colorado, but the blooming time does! While yarrow blooms in late spring in our Kansas prairies, in subalpine mountain meadows, it blooms in July, taking advantage of the sunshine and pollinators of mid-summer. There is little chance that, should they be grown together, cross-pollination could occur between these quite different ecotypes.

Prairie Smoke (Geum triflorum) is another wildflower species that remains the same from Kansas to Colorado. Again, the time of flowering differs. Kansas individuals bloom in spring, and Colorado individuals bloom during similar temperature conditions that occur at the height of the high altitude summer.

Members of the carrot and parsley family are commonly found in both Kansas and Colorado. Golden Alexanders (Zizia aurea) grace our gardens in spring, while high mountain meadows are filled with the yellow umbels of mountain parsleys in July.

The white, night-blooming showy evening primroses (Oenothera speciosa) typically appear in May and June in Kansas. Come July, their diminutive Colorado cousins, (Oenothera spp) make their appearance in rocky niches and along trails.

Locoweed (Oxytropis spp.) fills Colorado mountain meadows with patches of bright pinks, blues and lavenders. Like the wild indigoes (Baptisia spp) that brighten Kansas prairies and pastures, locoweed is a nitrogen-fixing legume. Both are also toxic to cattle, sheep and horses.

Ragworts (Packera spp.) are delightful yellow flowers of shade and sun. Colorado’s ragworts are commonly found along a trail’s edge in July. Kansas’ golden ragwort (Packera plattensis) is one of the first wildflowers to brighten winter-weary landscapes in April.

Penstemons (Penstemon spp) are abundant in the Rocky Mountain subalpine meadows in July. Generally short in height and with smaller flowers, they nonetheless add deep, rich lavenders, blues and purples to rocky niches and trailsides. Their taller Kansas cousins precede them, blooming in late spring.

Hike through a subalpine, shaded, moist forest, and suddenly you may encounter a faint scent of skunk, indicating that you have stepped on Jacob’s ladder, a lovely blue-flowered species that hugs the ground with ladder-like leaves. In Kansas, Jacob’s ladder (Polemonium reptans) is a woodland spring ephemera with striking blue, bell-shaped flowers, and yes, the scent of skunk!

Our Kansas goldenrods tend to be taller, filling the late summer prairies and pastures with swaths of yellow. They are the harbingers of autumn, blooming in late August and September. Subalpine goldenrods can’t wait that long. The diminutive Rocky Mountain goldenrod begins to flower in mid-July in the high montane meadows, adding their golden color to the seasonal procession of color.

These are just a few of the many familial relationships that exist between Kansas and Rocky Mountain native plants. Next time you travel west, take a moment to find a familiar “face” in the wildflowers at your feet!

“ . . . most of us rarely give any thought to the fact that the ground beneath our feet is a complicated, ever-moving tangle of rocks and animals and plants and water and chemical compounds that rivals the ocean as a wild, dark mysterious, and inscrutable realm.”

Many of us garden for wildlife, choosing native plants that provide vital shelter, food and habitat for a diversity of species. However, the soils in which our native plants grow also play an important role in the success of our native gardens. Soil is alive! Let’s dig deeper into this “wild, dark, mysterious, and inscrutable realm that is soil.”

Soils are composed of both living and non-living elements. Non-living minerals and rocks – soil particles of silt, sand and clay – intermingle with living elements to produce a unique mix of physical, chemical and biological properties that vary from region to region.

Let’s take a look at some of these “little things that run the world.”

Bacteria. Microscopic soil bacteria are by far the most ubiquitous organisms living in soil. Bacteria play important roles both in decomposition, and in fixing nitrogen.

Rhizobial bacteria live in nodules on the roots of legumes (pea and bean family), converting atmospheric nitrogen into compounds that the plants use. In return, rhizobium receive sugars from the legume – a symbiotic relationship.

Protozoans. Living in the water film surrounding soil particles are single celled protozoans. As predators, decomposers and consumers of bacteria, protozoans are important in nutrient cycling.

Fungi. Soil fungi are diverse in shape, size, form and function. Some are single-celled, others are multi-cellular. Most are beneficial, contributing to decomposition and nutrient recycling.

One noteworthy group, the mycorrhizal fungi, live symbiotically with roots, enhancing nutrient and water uptake in the roots. In return, mycorrhizae receive sugars.  More than 80% of the plants on earth have relationships with mycorrhizae.

Nematodes. Nematodes can be predators, fungivores, bacterivores, omnivores, or plant parasites. They also disperse bacteria, carrying and excreting bacteria as they move through the soil. Nematodes tend to be found in water films within soil.

Mites. Mites are important predators and decomposers. They break leaf litter down, making it available to smaller organisms. Mites are abundant and diverse and can be found from the soil surface to deeper soil layers. Depending on the species, mites feed on everything from bacteria, fungi, algae, and dead plants and animals, to insect eggs, nematodes, other mites and springtails.

Dwarf millipedes. Dwarf millipedes are decomposers, fungivores, herbivores and scavengers. Moving through pore spaces in the soil, they are typically found around roots.

Springtails. Springtails come in all shapes and sizes. They feed on dead plant and animal materials, often in the top layers of soil and in leaf litter. They are so named because of their tail-like structure that enables them to jump a short distance. As decomposers, they contribute to nutrient availability in soils.

Earthworms. Earthworms are perhaps the best known of soil creatures, and their contributions are well-known: mixing and aerating soils, and distributing nutrients and minerals in their waste.

Centipedes. Centipedes are predators, and they are fast runners, sometimes chasing their prey. They eat earthworms, and other insects, large and small, injecting venom to paralyze and kill their prey.

Beetles. The tiger beetle is just one of a host of insects that spends the larval stage of its life in soil. Both larva and adult are predators. Larval tiger beetles are predators, feeding on other insects on the soil surface. Tiger beetle larval burrows can be 18” deep.

These are just a few of the millions of organisms that live in the soil under our feet. All are important in maintaining healthy, productive soils.

Here are four tips to support underground wildlife, large and small, in the soils in your garden:

Hopwood, Frische, May and Lee-Mader. 2021. Farming With Soil Life: A Handbook for Supporting Soil Invertebrates and Soil Health on Farms. Xerces Society for Invertebrate Conservation. https://www.xerces.org/sites/default/files/publications/19-051.pdf

They pollinate 90% of the flowering plants on earth; and they eat plants, the crucial first step in changing plant energy into the fats and proteins that feed hosts of other animals. In so doing, insects sustain Earth’s ecosystems.  They truly are, in E.O. Wilson’s words, “The little things that run the world.”

Yet globally, insect populations have declined by 47% since 1974, a loss that translates into a decline in the very ecosystems that sustain all life on earth, humans included!

Why native plants? In study after study, it has been shown that native plants host many times more insect species than do non-natives.

Where can I find resources for host plants native to my area?

Planting a diversity of native plants chosen for their ability to provide food for caterpillars and flowers for nectaring bees, ensures not only a prairie garden filled with a diversity of insects and birds, but also a garden that contributes to a healthier environment. And it is all happening right outside our door!

One week ago today was the 50th Anniversary of the first Earth Day demonstration in 1970. The Environmental Protection Agency, the Clean Air, Clean Water, and Endangered Species Acts are lasting results of that first Earth Day! Yet much more remains to be done, and it can’t happen on just one day of the year. Earth Day reminds us that every day is Earth Day.

As gardeners and stewards and of our immediate environment, we are already making a difference in our own backyards and communities. As we explore and connect with nature each day, we are establishing a care ethic to make positive decisions for the environment, present and future. 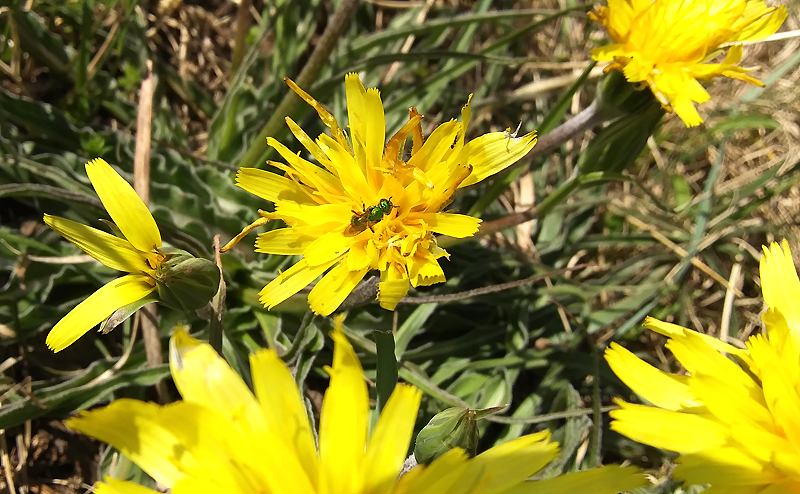 This year, Earth Day recognized the enormous challenges – and vast opportunities – of climate action. So, what better place to start climate actions than in our native prairie gardens? Native prairie gardens are – by their very nature – pollinator gardens. They attract an abundance of pollinators (and other small creatures as well) throughout the growing season. In so doing, they help conserve biodiversity, protect species threatened by climate change, and restore ecosystem balance.

But native gardens do so much more to mitigate climate change. They hold and conserve water, store carbon in extensive root systems, build fertile soils, and help maintain cleaner air. In tending native gardens, we benefit as well by experiencing beauty, joy, and a sense of well-being.

You can celebrate Earth Day every day by joining Earth Day 2020’s campaign to Protect Our Species. Because the Monarch butterfly is currently vulnerable and declining, it is one of ten species directing the Earth Day Network’s conservation efforts in 2020. Earth Day 2020 provides an informative Pollinator Garden Toolkit, and Pollinator Garden Worksheet to help you plan or add to your pollinator garden.

Then, attend the online FloraKansas Native Plant Festival, with its large selection of hearty, native flowers, grasses, trees and shrubs suitable for a diversity of habitats. If you have questions, FloraKansas has experts available too!

Connect to the broader community

Last, but not least, invite your neighbors, friends and family to join you in your efforts to create pollinator-friendly spaces. Garden by garden, we can create a mosaic of native habitats that benefit a broader community of both pollinators AND people!

Shorter days, cooler nights, bronzing prairie grasses and asters in bloom – all herald the arrival of fall on the prairie. However, as this year’s abundant growth recedes, our garden’s care and keeping into the fall and winter will affect both plants and pollinators in next year’s garden.

One of our most desirable spring pollinators is the Mason Bee; and our prairie gardens provide great habitat for this species. You can begin planning now to attract this special native bee species.

Mason bees are solitary nesters. They are incredibly efficient pollinators (one Mason bee can do the work of 60 honey bees), and they are docile. In March, adult females emerge, mate, lay eggs for 4-6 weeks, and then die.

Eggs are laid in a series of small chambers the females build within tunnels of dead wood or hollow plant stems in a protected spot. Each egg is provisioned with pollen and then plugged with mud, hence the name “mason.” Eggs develop for the remainder of the year. Allowing stems and dead woody plant materials to remain in our gardens in fall and winter preserves developing Mason bee larvae that may be present.

Because a number of our North American native bees, including Mason bees, are in decline, native gardeners can further encourage Mason bees by adding nesting bee boxes. Bee boxes are simply made, whether from wood, bamboo or cardboard.

As you plan for spring, you might include a bee box-making day as a winter project. Install your bee box in a dry, warm, protected spot early next spring, make sure there are a number of nearby sources of pollen and mud, and you are welcoming one of our most interesting native bees, the Mason bee, into your spring prairie garden!