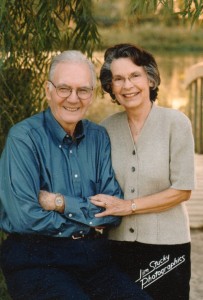 Harold and Evie Dyck,
founders of the Dyck Arboretum

The first tree of the Dyck Arboretum of the Plains was planted October 10, 1981 on the original 13 acres.

Now the Arboretum has matured into one of the largest native plant gardens in the region featuring more than 1,000 varieties of native and adaptable trees, shrubs, wildflowers, and grasses. A master plan called “The Prairie Window Project” guided the development of a reconstructed prairie from 2004 to 2010 on the adjacent 18 acres to the south.

The Arboretum was a gift of Harold and Elva Mae Dyck. The Dycks are well-known for their contributions to the Hesston community where they have lived since 1949. Harold was with Hesston Corporation for 20 years and served 18 years as representative for the 99th District of the Kansas House of Representatives. He also served as regional manager for the Mennonite Foundation. Elva Mae Dyck, a former member of the Hesston College Board of Overseers, the Hesston Tree Board and the Schowalter Villa Board of Directors, has always had an active interest in the outdoors.

After a trip to the Bartlett Arboretum in Belle Plaine, Kansas, the Dycks began discussing what an arboretum featuring native Kansas plants and trees could mean to the community and to the state.

It was their hope that the arboretum would encourage a greater understanding and appreciation of the prairie and the simple beauty of Kansas.

The site chosen for the arboretum was adjacent to Schowalter Villa retirement community and one block south of Hesston College. “We wanted it to be close enough to the villa and the college so that residents and students could walk in it and enjoy it throughout the year,” explains Evie Dyck. Because of the Dyck’s desire to see the arboretum operated as a non-profit educational facility, Hesston College was a logical choice as an operating organization.

In 1999, a Visitor and Education Center designed by Schaefer Johnson Cox Frey & Associates of Wichita was completed after a successful capital campaign.  The Prairie Pavilion, designed by the same architecture firm, opened in August of 2011.