Part II of my blog series about caterpillars will cover their bodies and behaviors, and the habitats you can build for them at home.

Once you look closely, you can easily see that caterpillars are more than just a pudgy worm. They often have visible faces, charismatic coloration and interesting behaviors. Caterpillars are actually six legged creatures (because, of course, they are insects!), though it looks like they have many more. The six real legs are located at the front of the body near the head. All other legs are considered ‘prolegs’; appendages for gripping, and moving, but not true jointed legs.

Some caterpillars seem to have horns or antennas visible on their heads, but you are actually seeing tentacles. Most caterpillar antennae are very small and inconspicuous, located near the mouth, while tentacles are large, fleshy and can occur in several places along the top of the body. Tentacles on the head help them sense the world around them while tubercules (fleshy knobs along the body) are usually for intimidating predators.

You may have questioned at one time or another how caterpillars ‘breathe’, or if they do at all! In fact, insects breathe through holes in their bodies called  ‘spiracles’. These tiny openings (found along the sides of most caterpillars) bring air into the trachea of the insects and usually deliver oxygen directly to the body tissues. 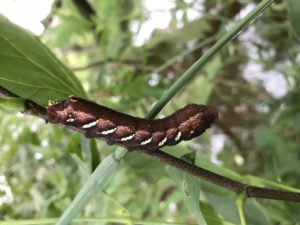 A white-lined sphinx moth (Hyles lineata) caterpillar blending in with a rusty brown redbud stem. As long as my finger at least, this is one huge caterpillar!

Dude with a ‘Tude

When you are such a delicious and nutritious snack for birds, it pays to defend yourself and stay hidden! In the last post I discussed defense mechanisms such as special coloration, camouflage or toxic setae (hairs). But sometimes their defenses have much more attitude! For instance, swallowtail caterpillars are famous for their charismatic show of osmetrium, a forked organ that shoots out suddenly to startle predators. When threatened, the caterpillar quickly extends the osmetrium to scare the offending spider, bird, or ant. A great video of this reaction is found here. The organ resembles a snake tongue or tiny horns and can secrete unpleasant odors to further repel a would-be predator. 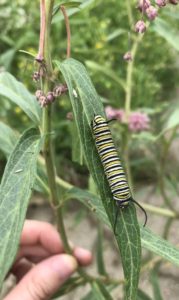 Monarch caterpillar on a swamp milkweed leaf outside the Arboretum greenhouse.

Caterpillars with osmetrium purposely produce unpleasant odors to scare predators, while other butterfly larvae take drastic measures not to produce an odor. Silver-spotted skipper caterpillars are famous for their ability to fling their frass (the fancy word for caterpillar poop) incredible distances. Scientists believe this helps keep predators such as wasps from detecting where the caterpillar is living. To be sure no predator finds their cozy home, a tiny skipper caterpillar can shoot their turds up to 5 feet away! That’s about 30 times their body length. They accomplish this feat through a controlled burst of high blood pressure.

You have to see it to believe it — https://www.youtube.com/watch?v=WW5j7eY15Yw

Caterpillars have amazing organs called ‘spinnerets’ that produce silk. We know that silkworms are bred especially for their prolific silk production, but many of the caterpillars in your very own backyards also make silk. Some caterpillars use silk to escape predators by attaching it to a leaf and ‘bungee jumping’ to safety. They also use it to make mats or trails around the plant they live on to make travel easier. Some caterpillars will make elaborate tents or ‘bags’ out of silk, with hundreds of their kin inside with them. And when it comes time to mature into a butterfly, a silk ‘button’ helps the chrysalis hang from a leaf or twig. Moths make their entire cocoon out of silk, surrounding themselves in a soft yet protective barrier. 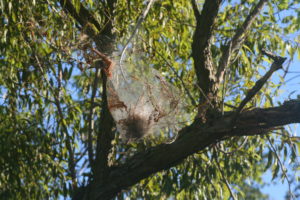 The fall webworm (Hyphantria cunea) is a well known but harmless pest. Characterized by a large sticky silk nest and a voracious appetite, they rarely cause lasting damage to otherwise healthy trees. By Alison Hunter [CC BY-SA 2.5 (https://creativecommons.org/licenses/by-sa/2.5)], from Wikimedia Commons

Regular visits to the Arboretum will provide ample bug-watching opportunities, and our staff are eager to chat with you. But the best way to learn about insects is to see them in person. Plant a native garden of your own where insects can thrive! Lots of wonderful resources exist about butterfly gardening, but remember: it isn’t a butterfly garden unless it includes host plants. They need host plants (the specific plants the larvae feed on) and native nectar to sustain their entire life cycle. Otherwise, as Lenora Larson might say, you are just “bartending”, serving only “adult beverages” to the butterflies but not supporting the larvae.  If you need some inspiration to create your own native garden paradise for butterflies and moths, talk with one of our staff members at the upcoming FloraKansas Native Plant Festival!

This time of year is great for caterpillar hunting. I have been finding lots of amazing, colorful critters munching away on the foliage here at Dyck Arboretum. I am always eager to get a picture of them, if I can, so that I can properly identify them later using guides and help from the internet. In doing so, I become engrossed in their beautiful and strange anatomies – spots, stripes, horns, hairs and amazingly grippy legs. There is much to know and discover! 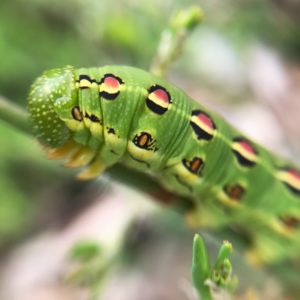 I get close up photos of insects on my phone using a clip on macro lens. By doing so I can see the tiny details on this white-lined sphinx moth caterpillar (Hyles lineata), like the yellow tips on his legs and the white spots on his head.

When a child sees a caterpillar, they might be tempted to point and say “Oooh, worm!”. But we must remember that caterpillars are not worms, they are larvae. Larvae is the immature form of an insect. A true worm, such as an earthworm, isn’t an immature form of anything. There are several other easy to notice differences:

Also, caterpillars often sport wacky colors and patterns while most of the world’s worms are much more inconspicuous. Earthworms and some marine worms, roundworms, and tapeworms are usually sporting brown or tan skin. However, many types of ocean dwelling flatworms are incredibly colorful, though you won’t likely confuse these guys for caterpillars. 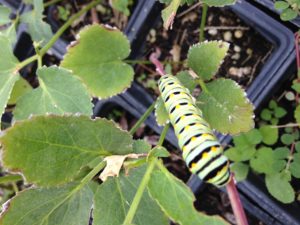 An adult black swallowtail caterpillar feeding on Zizia in our greenhouse. These swallowtails can only feed on plants in the Parsley/Carrot family. 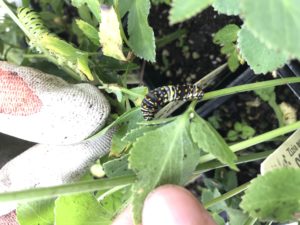 Caterpillars are genius defense players. They are so packed full of protein and delicious to predators, they have had to evolve many ways to protect themselves. Some caterpillars, like the monarch butterfly, make themselves taste bad by eating milkweed leaves with toxins in them. Others try to look intimidating with aposematic coloration – body patterns and colors that warn predators to stay back! And some, like the spicebush swallowtail, even grow fake eye spots on their bodies to fool their hunters into thinking they are snakes. My personal favorites are the hairy ones. Caterpillars will sometimes grow hairs to make them hard or unpleasant to swallow. What bird wants a mouth full of hair anyways? Sometimes these hairs are designed to fall off and lodge in the skin/mucus membrane of whatever is disturbing it, causing an itchy rash in some people. 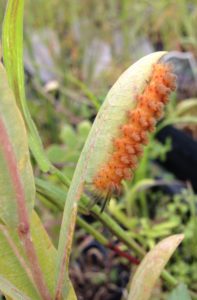 This is a cycnia moth caterpillar feeding on Asclepias sullivantii in our plant nursery. This little guy needs milkweed just as much as the monarchs, but doesn’t get the same press for some reason. I made sure not to touch him because of all those potentially itch-inducing hairs!

In part II of this topic, I will talk a little bit about the specific parts of their body, special caterpillar diets, silk making abilities, and how you can design your very own caterpillar-attracting butterfly garden. Until then, keep a lookout for these special critters and do a little discovering of your own!