This post is the second installment of the Imposter Plants series. In the first post I discussed the differences between native and adaptable, while also trying to clear up the confusing descriptor ‘naturalized’. Here I will dig into the details on what it means to be invasive, noxious, weedy, alien or exotic.

On February 3rd 1999, President Bill Clinton signed an executive order that was meant to protect the US from imminent invasion – plant invasion! Non-native plants that become out of control can affect agriculture, ecology, endangered species and human health, and the President was right to be concerned.

There are many definitions for what an invasive plant is, and some are contradictory. Here is my simplified aggregation of the most prevalent ones on the web: a plant is invasive if it is non-native to the region and spreads aggressively enough to displace native plant populations. These plants are not only bullies in the home landscape, they can easily escape into the wild and begin reproducing. Harkening back to the previous post, non-native plants that reproduce on their own in the wild are ‘naturalized’, but the important distinction is that naturalized plants do not degrade habitat and cannot outcompete natives for nutrients, water or sunlight. Invasive plants certainly do, often causing damage to the local flora and fauna.

Field bindweed (Convolvulus arvensis) is an invasive plant as well as a noxious weed. Brought here from Eurasia, it quickly adapted to the North American climate and is pervasive enough to choke out native plants and hinder agriculture. 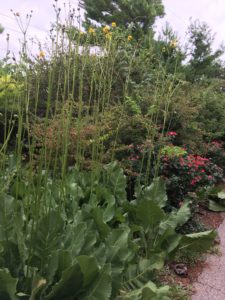 Prairie Dock (Silphium terebinthinaceum) is a beautiful native species, but spreads aggressively and can take over your garden. Even so, this is not technically an invasive plant.

I truly despise the term ‘weedy’. Not only is it vague, it is completely subjective. One person’s weedy plant is another’s favorite flower! The true definition of a weed is merely ‘a plant out of place’; a weed can be any plant, native or non-native, that does not belong in its current place. We use this word to describe the behavior of the plant more than the plant itself. Does it pop up everywhere? Does it come back even after you pull it? Well, a gardener might call this plant a weed, even if they once planted it there themselves. But since it only describes the action of the plant and not the legal status or origins, this word doesn’t hold much weight with me. 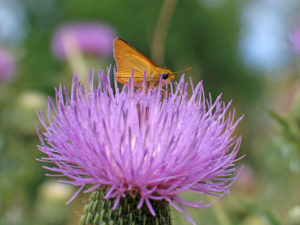 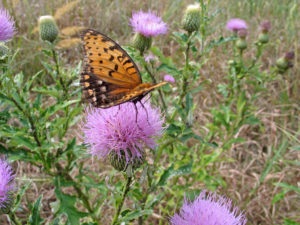 A noxious weed is a different story. Noxious is a legal term and its definition is closely tied to agriculture. Per the 1974 Federal Noxious Weed Act, “a plant that directly or indirectly injures crops, other useful plants, livestock, poultry or other interests of agriculture, or the fish or wildlife resources of the United States” is considered noxious. Confusingly, native plants can be noxious weeds. A noxious weed grows aggressively, multiplies quickly without natural controls (such as herbivory) and threatens agriculture. The USDA regulates these plants and monitors their populations.

Lastly, let’s tackle a few terms that arise occasionally to confuse and befuddle. Though we call some plants ‘alien’, this doesn’t mean they have invaded from Mars. We can use this term interchangeably with ‘non-native’; both mean that a given plant is not naturally found in the area. You may also hear a plant called ‘exotic’. What comes to mind might be tropical, rare, or expensive specimens, but in fact this is just another name for a non-native plant. An exotic plant has origins in another place, perhaps on another continent. Exotic and alien are often bundled together with other terminology – exotic introduced (a non-native plant brought to a new place), an alien invasive (a non-native plant that harms local ecosystems), an exotic naturalizer (a non-native that reproduces in the wild but doesn’t cause major problems) … and so on! 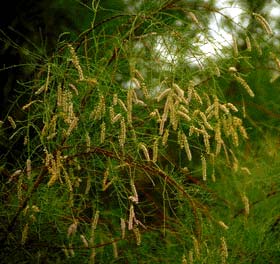 Tamarix is an exotic species native to Eurasia and Africa, but is now spreading aggressively over many parts of the US. So prevalent in some areas, it can lower the water table and deposit large amounts of salt in the soil.

Whether a plant is invasive or naturalizing, native or weedy, can often change based on who you are talking to. Some of these terms overlap in definition, leaving much to argue about. There is even scientific interest in finding a new way to classify these plants to help dispel the confusion. By educating yourself on correct classifications, you can help friends and neighbors understand why they shouldn’t plant invasives that ruin our wilderness. You can also help at our FloraKansas Plant Festival, teaching others that native plants are not just pretty ‘weeds’.