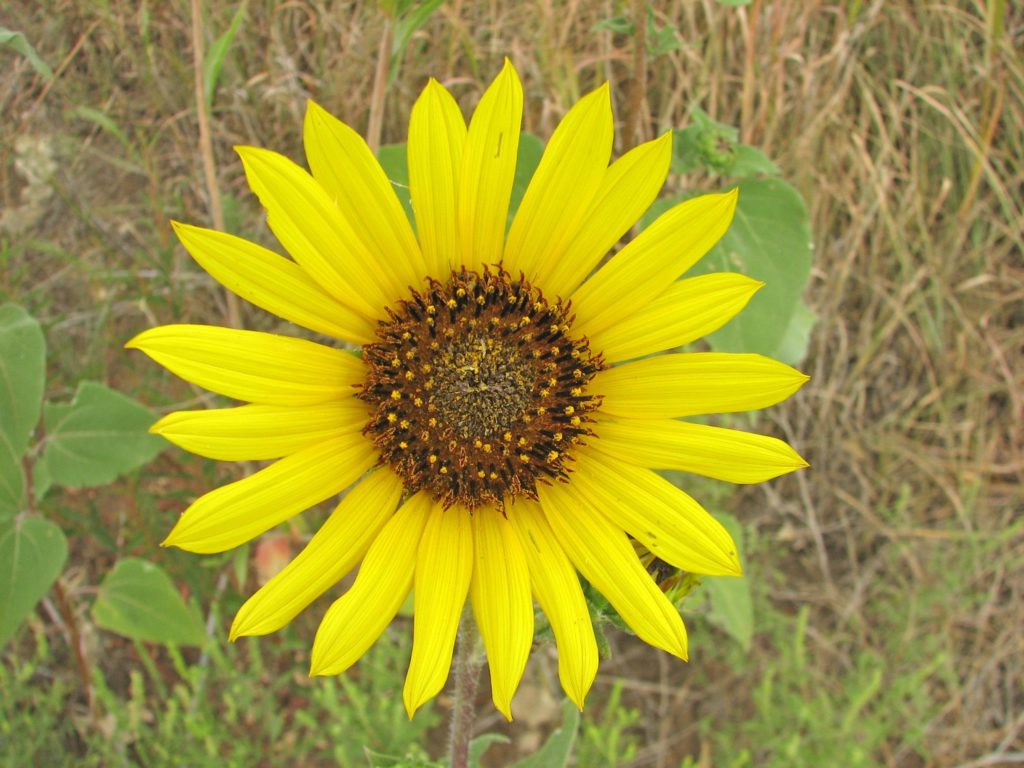 The word “sassy” seems like a good word when considering Helianthus, the genus for sunflowers, because of its double meaning. In a positive context, sassy means “bold,” “fresh,” and “audacious.” They have also become annoyingly invasive. But let’s keep it on the positive side for a moment.

There are at least nine species of Helianthus in Kansas present in nearly every habitat type.  The official state motto of Kansas is the Latin phrase; Ad Astra Per Aspera (meaning “To the Stars Through Difficulty”). This fits perfectly with the state flower of Kansas, annual sunflower (Helianthus annuus). Its leaves and flowers reach for the sky throughout the state in spite of a variety of harsh conditions it faces with regard to soils, precipitation, and temperature.

At the very least, sunflowers are extremely resourceful, using a variety of strategies to survive. Their colorful ray flowers attract pollinators, and the hundreds of disc flowers per head are easily pollinated. Quick ballpark counts of the number of flowers in one flower head and the number of flower heads on one annual sunflower plant has me estimating that the annual sunflower pictured below will produce more than 100,000 seeds! 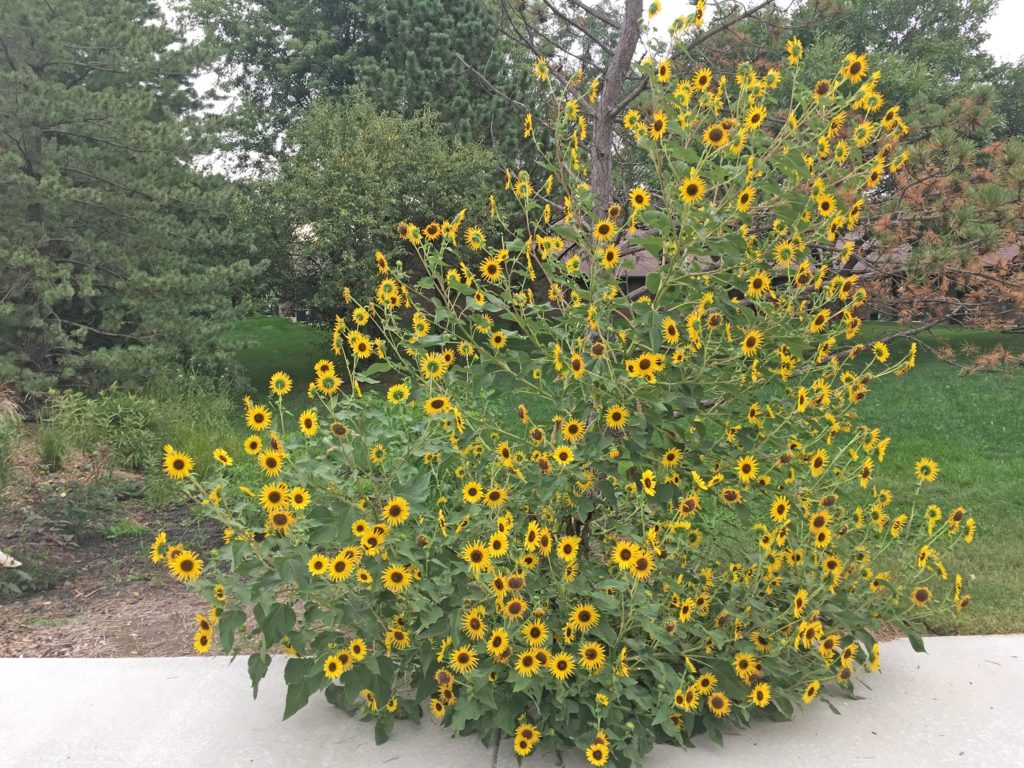 Many of the perennial sunflower roots feature spreading rhizomes that can help a single plant produce large vegetative colonies. Some are also allelopathic and produce chemicals that hinder the growth of neighboring plants. 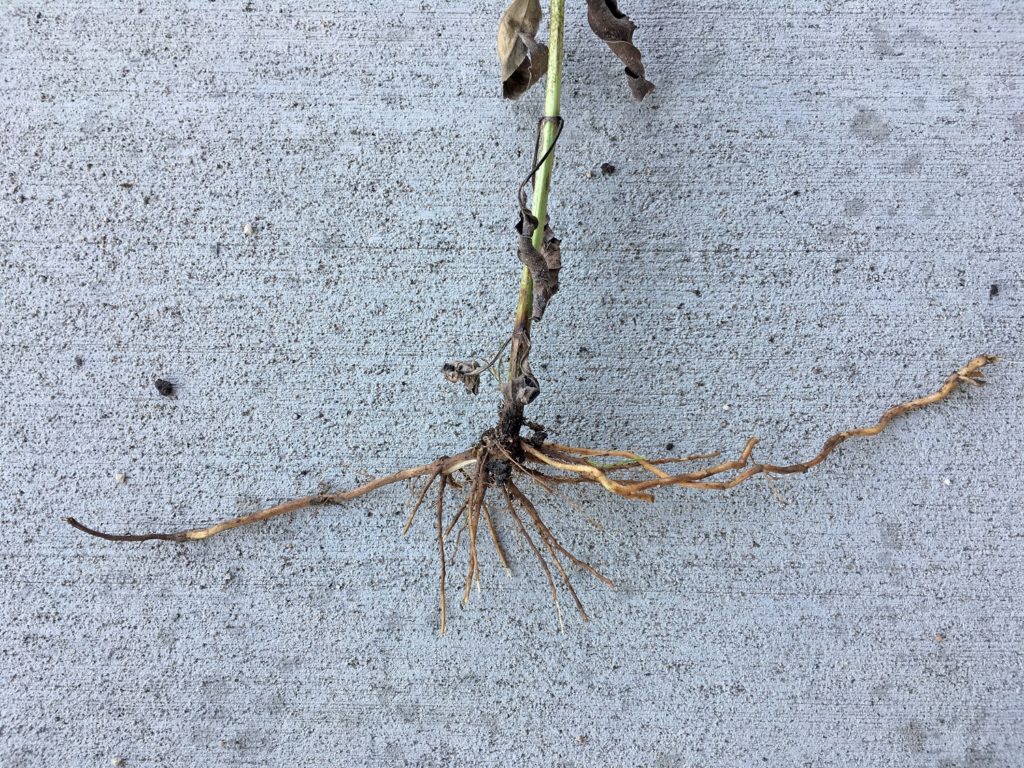 Sunflowers are also a beautiful hallmark of the late summer and fall prairies of Kansas. They aesthetically grace our roadsides with golden yellow, bolster the food chain by providing nectar for insects during what can be a dry time, when little else is blooming, and their seeds provide loads of food for birds and small mammals throughout the fall and winter. 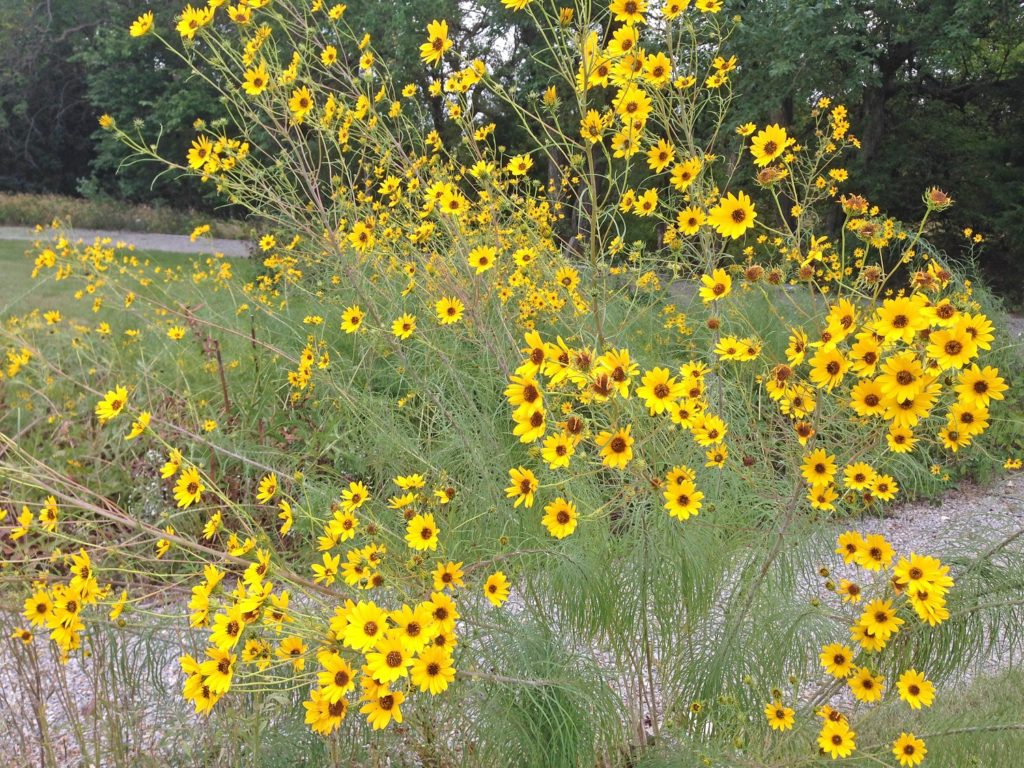 Now, for the negatively sassy side of Helianthus that can be defined as “overbold,” “glaring,” and even “flagrant.”

For the reasons described above, Helianthus is very successful in establishing colonies and can do so at the expense of other species. I’ve known this for decades and have typically kept sunflowers out of prairie reconstruction plantings here at the Dyck Arboretum and for landowner consultations. However, knowing that this group of plants is a natural part of the prairie and provides tremendous benefits for wildlife, I decided with our most recent and largest Arboretum prairie reconstruction planting in 2009 to include a little bit of seed (only 0.000079% of the wildflower seed mix) of rigid sunflower (Helianthus pauciflorus).

Now I’m second-guessing that decision. A recent (July 2017) vegetative sampling of this prairie reconstruction showed that rigid sunflower was by far the most dominant species of the 56 species of wildflowers and grasses sampled. In the northern, most visible parcel of the Prairie Window Project prairie reconstruction, rigid sunflower made up nearly 19% of the species sampled. The second most common species at nearly 9% was also a Helianthus, Maximilian sunflower (H. maximiliani), a species we didn’t even include (at least knowingly) in the seed mix. 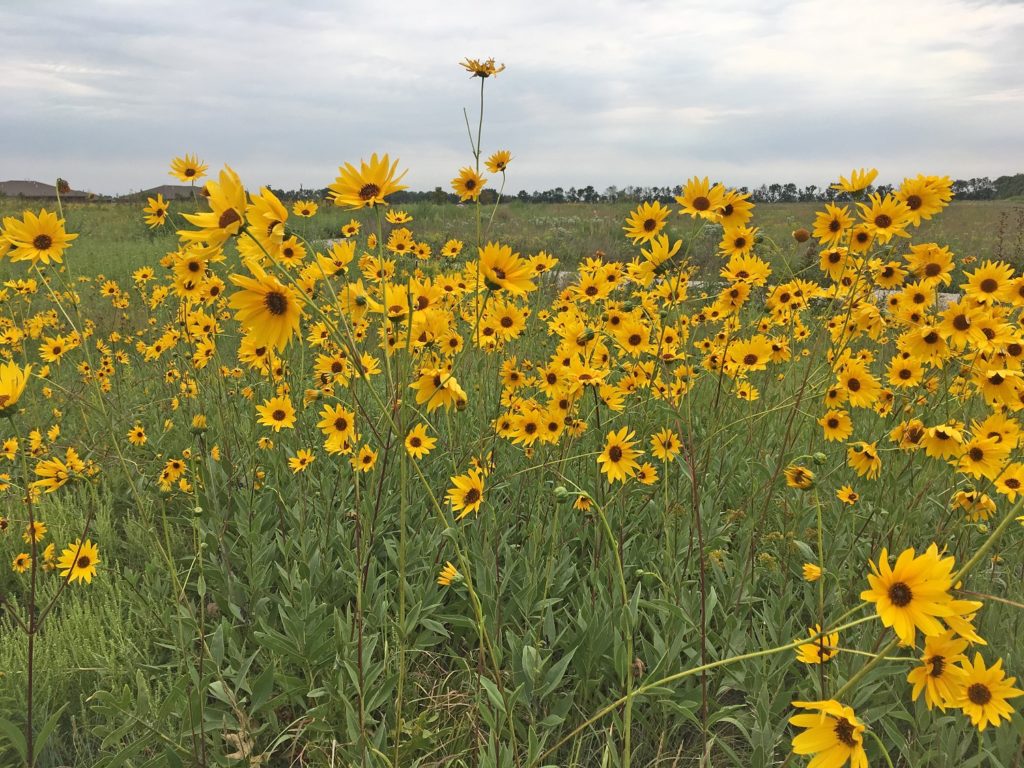 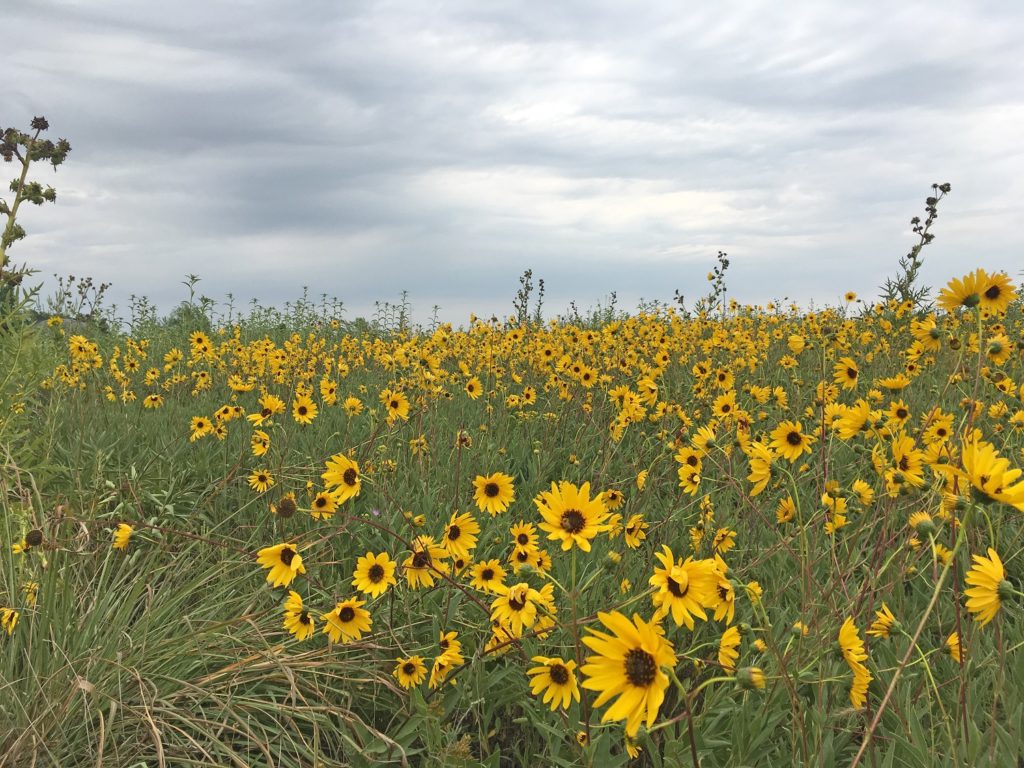 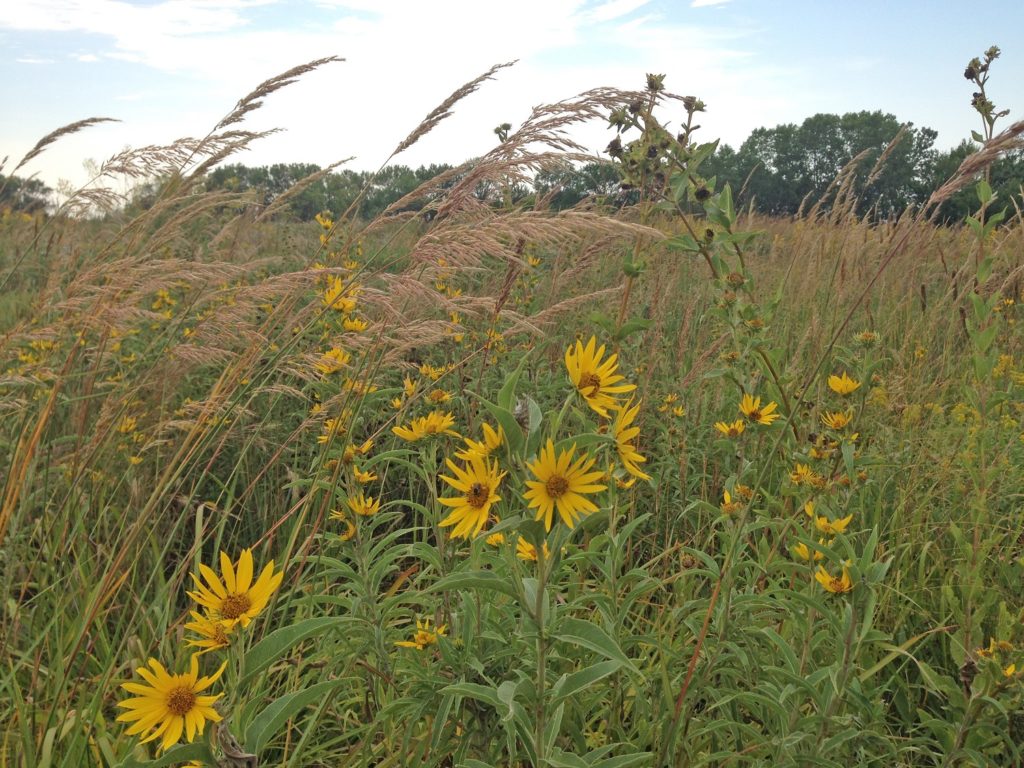 There is still nice species diversity in this young prairie reconstruction that appears to host a diverse array of wildlife including insects, amphibians, reptiles, mammals, and birds. I’m not ready to throw in the towel and start spraying Helianthus patches. I will, however, begin to try and manage this genus with specially timed mowings and prescribed burns to try and slow its spread and reduce its dominance. Perhaps I’ll even connect with a farmer friend or two that would like to experiment with grazers such as cattle or goats in small enclosures and hope they have a hankerin’ for Helianthus.

In the meantime, I will try to appreciate positively sassy and enjoy the bold, fresh, and audacious floral display of Helianthus that is currently gracing our prairie reconstruction in a big way.