The start of December means the start of “pre-Christmas”: the time of year when gifting stress sets in and your friends keep posting pinterest-worthy photos of their DIY holiday decorations. Who has time to hot-glue homemade ornaments and make garlands out of twine? It can induce a crippling case of craft-envy for people who have full time jobs and/or lack artistic prowess of their own.

For weeks I have been collecting pine cones from the Arboretum grounds, wishfully thinking I will find time to incorporate them into a hip holiday craft. The crafting is still on hold, but in the meantime I have become inspired by the cone itself! As the symbol of winter and the star of holiday decorating, we owe it to the humble pine cone to learn a bit about its fascinating botany before we dry it, paint it, wrap it in ribbon and hang it from the door knocker.

Pine cones (and all true cones) are produced by a group of plants called gymnosperms. Pronounced just as it is spelled (gym-no-sperm) and originating from the Greek language, it translates to mean “naked seed”. The seed doesn’t get this label because of exhibitionist behavior, but because, unlike seeds of flowering plants, it develops outside of an ovary. 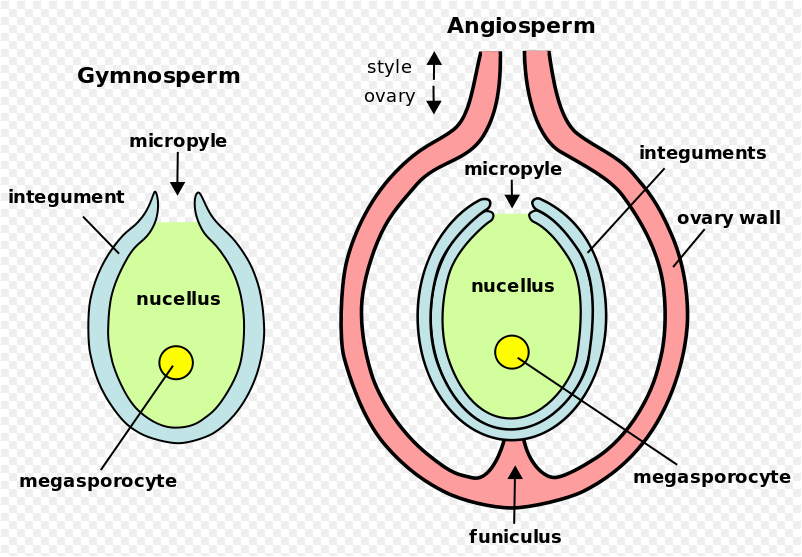 Since gymnosperms do not flower, they do not form a fruit as an ovary for their seed. Their cone is a rigid vessel for the developing seed which rests on the top of a scale. When the cone is mature and dries out the scales will open, dropping seeds. 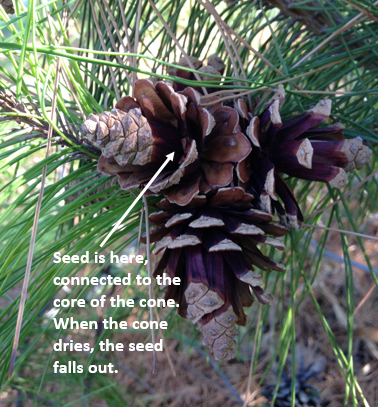 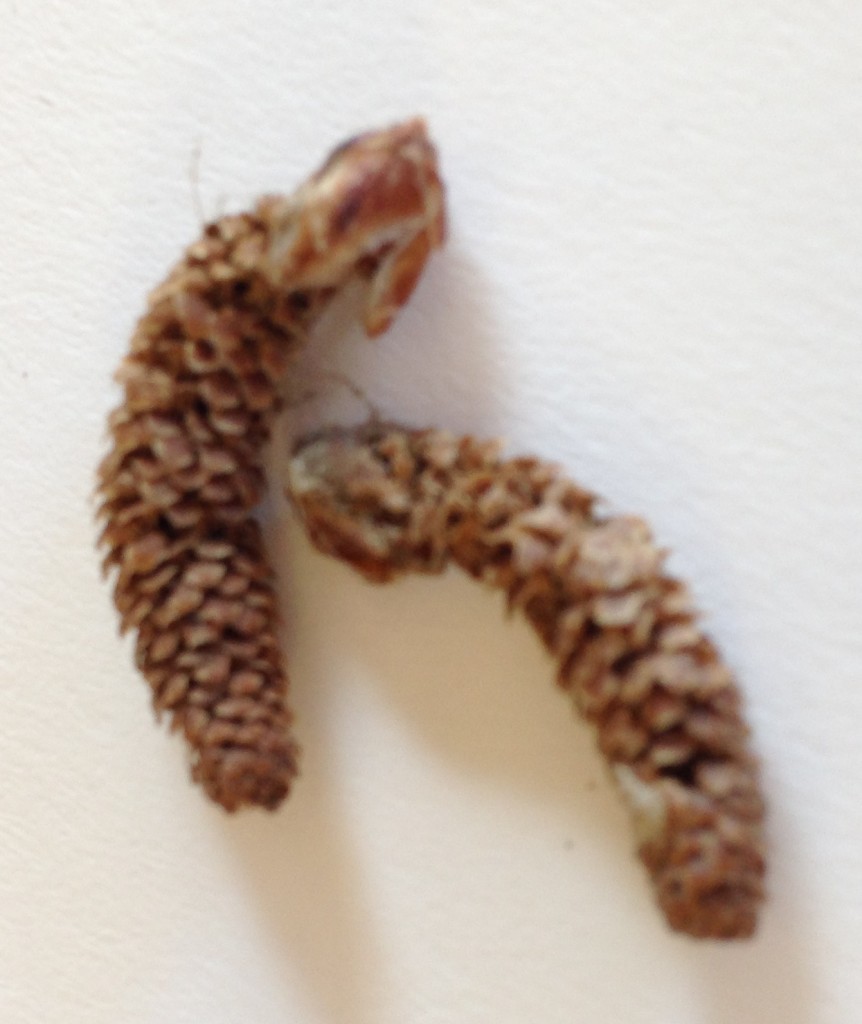 Seed bearing cones are female, while pollen filled cones are male. Both sexes of cones grow on the same tree,  but male cones grow on lower branches so that the wind can blow pollen up to the female cones. Likely all the cones you will collect for decorating are lady cones, since male cones are significantly smaller, softer and less conspicuous.

Pines, cedars, and spruce trees are examples of common gymnosperms, but baldcypress, ginkgos and cycads are all unexpected members of this group as well. Cones from pine and spruce trees are my favorite to decorate with because of their classic Christmas charm and uniform scales, but you may want to hunt down some more exotic cones for yourself! The Arboretum grounds are home to many mature evergreens currently bearing cones, each with their own charisma. 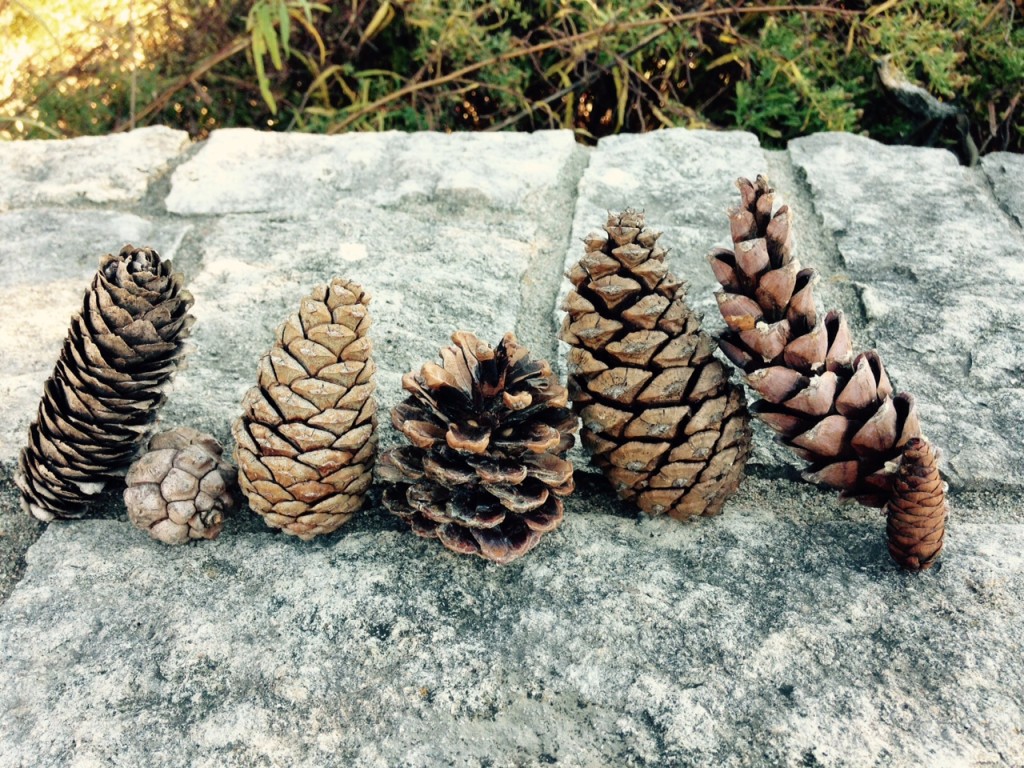 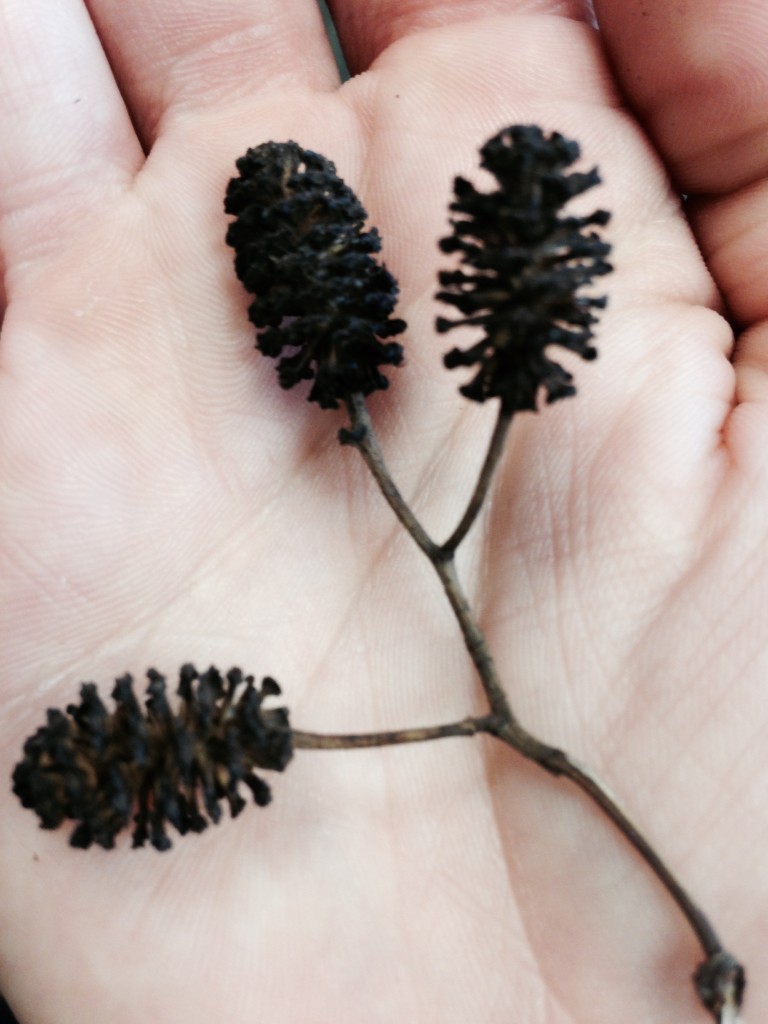 I must note that some of my favorite cones are not true cones at all!  The alder tree on the east border of the Arboretum makes adorable little cones as big as your thumb tip, yet this species is not a gymnosperm.

These cones are actually flowers that resemble their cone-bearing ancestors; flowering plants evolved from gymnosperms, yet alder trees have retained some characteristic reproductive structures.

If you can’t impress your friends with precision gluing and glitter technique this holiday season, impress them with your botanical knowledge! They may wish they had spent less time slathering peanut butter on pine cones  and more time learning about them.