Mention fall blooms to most gardeners and they think of chrysanthemums.  Blooming in September and October, “mums” are the major source of color in most late-season gardens.

Another group of fall-bloomers that are just as attractive, but not as well-known, are the asters.  Asters are related to chrysanthemums (both are in the Sunflower Family) and have similar daisy-like flowers.  Like chrysanthemums, asters also come in a wide variety of sizes and colors and are perennial, meaning they come up year-after-year.  There are several native asters in the collections of the Dyck Arboretum and these are discussed below.

The New England aster (Aster novae-angliae) occurs in eastern Kansas.  One of the taller species, this plant may reach three to four feet in height.  The flowers are generally a shade of purple in color, although pink and white-flowered forms have been found.  ‘Purple Dome’, ‘Hella Lacy’, ‘Alma Potschke’ and ‘Vibrant Dome’ are good varieties for the garden. 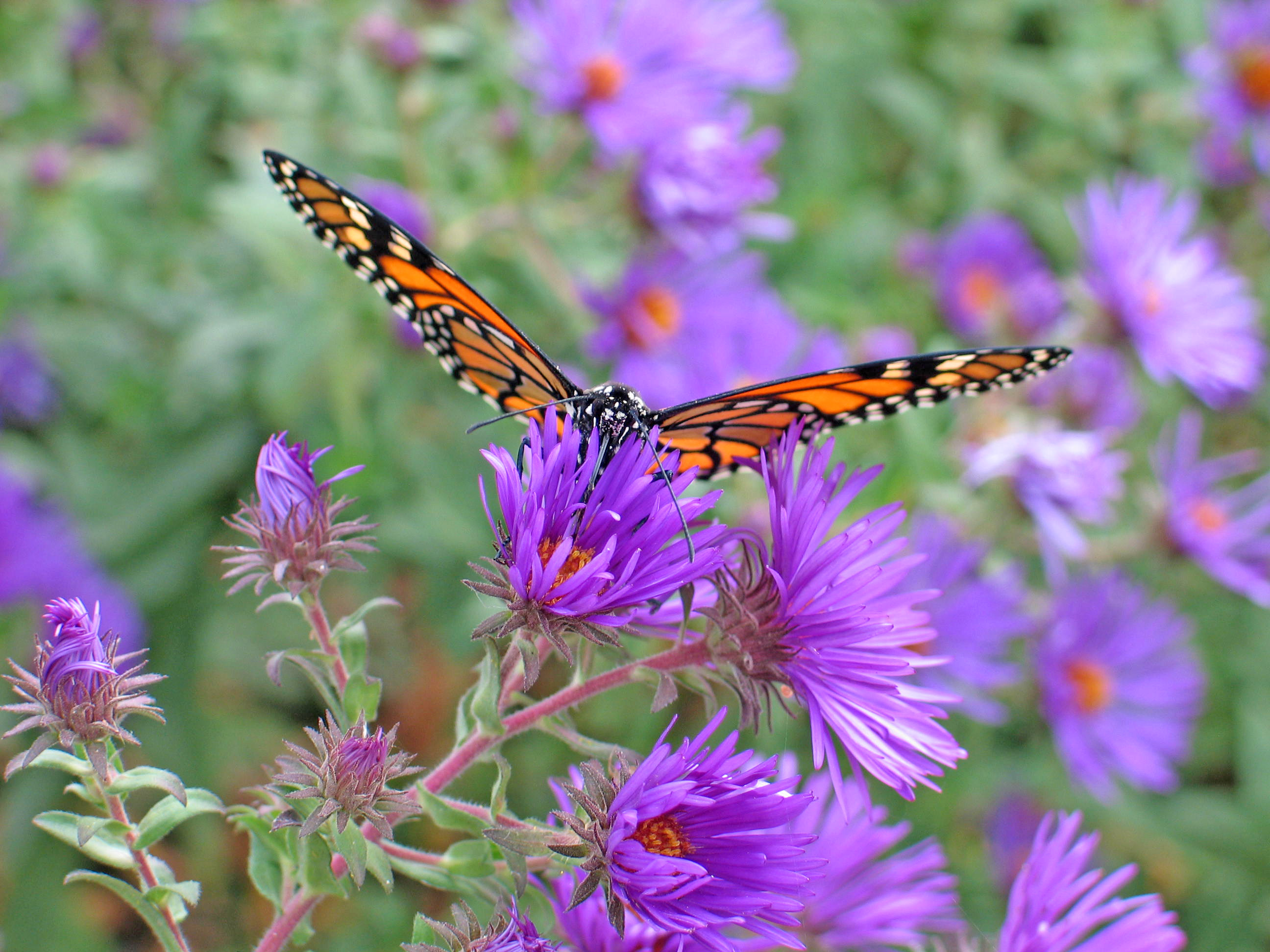 The sky blue aster (previously Aster azureus, now Aster oolentaniensis) grow two to three feet tall and has a bright blue flower.  Also occurring in eastern Kansas, this species in particularly useful as a garden plant because it can tolerate dry shade.  ‘Bluebird’ is a nice selection.

The aromatic aster (Aster oblongifolius) grows further west than the previous species, and is a more drought-tolerant plant.  Its name alludes to its fragrant purple flowers and pungent foliage when bruised.  This species grows about two foot tall.  We have ‘Dream of Beauty’ (short with pink blooms), ‘October Skies’ (2’ x 2’ with light blue flowers)  and ‘Raydon’s Favorite’ (3’ x 2’ with light blue flowers). 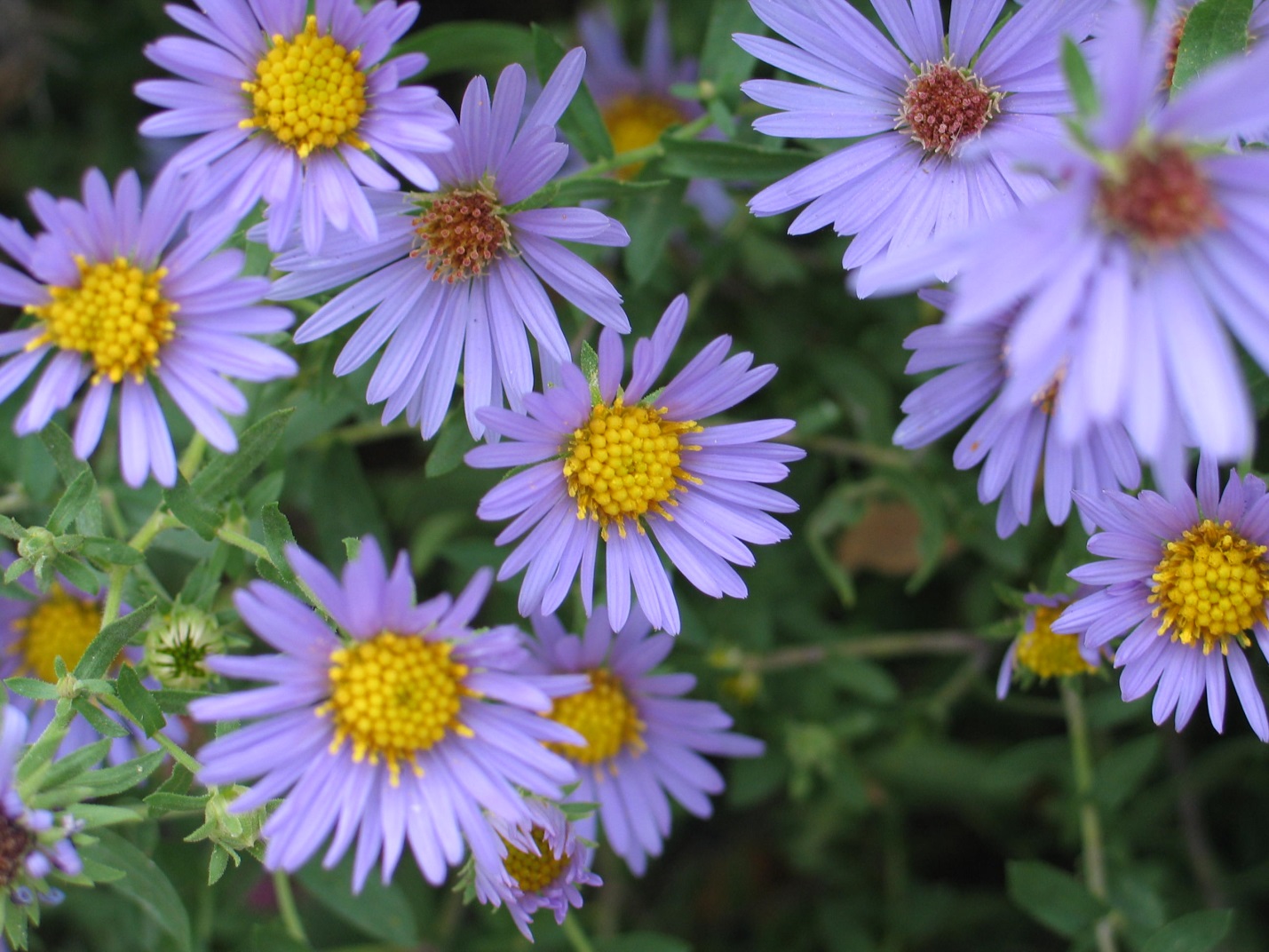 The heath aster (Aster ericoides) has the smallest flowers of any in the group, but it produces them in large enough numbers to make an impressive show.  In the late summer, it is covered with tiny white daisies.  Typically, it grows to two feet tall.  This adaptable plant occurs throughout much of Kansas.  ‘Snow Flurry’ is a groundcover form only reaching 6-8 inches tall.

Fendler’s aster (Aster fendleri) is the smallest of all the Kansas asters, only reaching about eight inches in height.  Occurring in central and western Kansas on dry, rocky prairie, it is probably the most drought-tolerant of our native asters.  In September these low plants are literally covered with lavender daisies.  The variety ‘My Antonia’ would make a nice addition to a xeric garden.

A few varieties for shade would be White Woodland Aster (Aster divaricatus ‘Eastern Star’) which makes a great groundcover with white blooms and mahogany stems.  It only reaches 12 inches tall.  The other woodland aster is Blue Wood Aster (Aster cordifolius) which is taller (3’ X 3’) with loads of tiny light blue flowers. 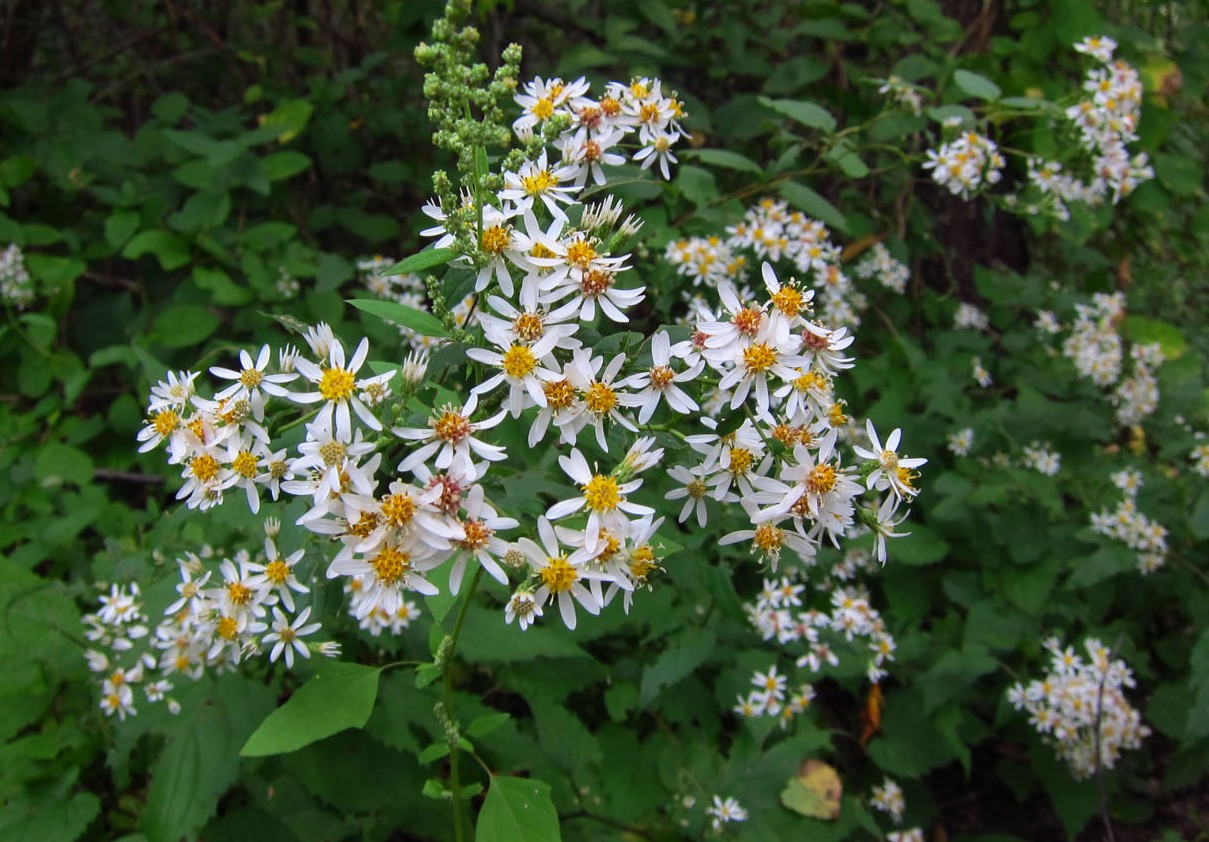 In addition to being appreciated by humans, many asters also attract many different pollinators including Monarchs.  Planting asters is a good way to bring these beautiful creatures into the home garden.

Of the asters described above, only New England aster is widely available for purchase.  We carry many of these asters at our FloraKansas plant sales.  The others can be obtained from mail-order nurseries that specialize in wildflowers.

These native wildflowers are good examples of plants that are not only beautiful and useful, but also hardy and adapted to our climate and growing conditions.  In my opinion, you should give them a try.